The Bob Dylan podcast from Freak Music Club. Diving deeply into Dylan's work talking to authors, dylanologists, musicians, fans and more. Our Season One is focused on Time Out Of Mind in celebration of its...more Ray Padgett is an expert on cover songs. He runs the Cover Me website that reviews and discusses all kinds of cover song performances, and published a book called Cover Me that take a deep dive into twenty of the most iconic cover songs in history (including All Along The Watchtower and Make You Feel My Love). We asked Ray if he would share his knowledge and impressions of Time Out Of Mind cover songs, and he gave us a fun and interesting presentation. This podcast captures that event, and a little Q&A afterwards. Ray also runs a must-have Dylan email newsletter called Flagging Down The Double E’s. The newsletter does deep dives into legendary Dylan live shows, and has delivered some wonderful interviews with musicians that have played with Dylan as well. A video version of this episode is available to Premium Members at FreakMusic.Club. LINKS: Follow Ray Padgett on Twitter, Instagram Time Out Of Mind Covers Playlist (Spotify) (AppleMusic) Check out CoverMe Website Ray's Cover Me book (Amazon) Ray's 33 1/3rd Book: I'm Your Fan The Songs of Leonard Cohen ... 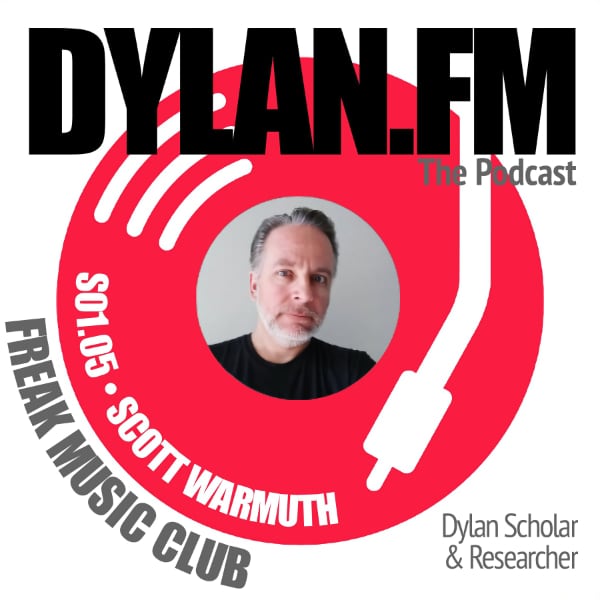 S01.05 Scott Warmuth (Influences and Lyric Borrowing in Dylan's Time Out Of Mind)

Scott Warmuth is a Dylan fan, scholar, and researcher who is known as the guy who discovered the 'late period' writing style of Bob Dylan by identifying hundreds of influences and borrowed lyric sources across all kinds of books, movies, magazines, and more. In this episode he points his magnifying glass at Time Out Of Mind and shares with us some of the sources that 'inspired' Dylan as he was creating the songs on this album. We'll hear about Henry Rollins, Johnny & Jack, and others who's writings have inspired or empowered the lyrics of Bob Dylan. LINKS: Follow Scott Warmuth on Twitter, Pinterest, Instagram, Blog Scott Warmuth on The Bobcats Podcast Scott Warmuth on Man and God and Law Podcast Scott Warmuth in the book - The Dylanologists (Amazon) ... 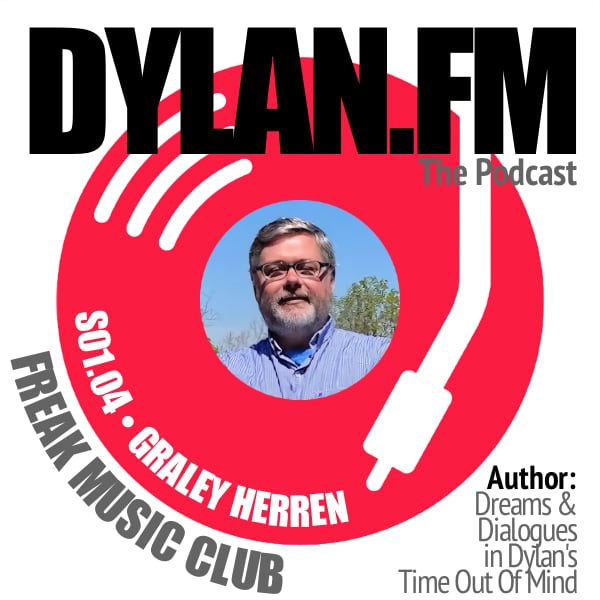 Graley Herren is the author of 'Dreams and Dialogues in Dylan's Time Out Of Mind, and a professor (Chair of the English Department) at Xavier University in Cincinnati Ohio. He specializes in Modern Irish Literature, Modern Drama, Samuel Beckett, Don DeLillo, and Bob Dylan. He is the author of Samuel Beckett's Plays on Film and Television, The Self-Reflexive Art of Don DeLello, and numerous articles and chapters on various 20th and 21st century artists. The premise of the book is that Time Out Of Mind represents a series of dreams, and that the songs on the album make up a single connect song cycle. From there Graley finds what he calls three ‘dimensions of experience’ filtered through the songs -- The first is Murder Ballads, the second is Religious Allegory, and the last is Race in America. The bulk of the book is made up of him showing how the lyrics and songs reflect each of these dimensions. Professor Herren’s book goes deep into the possible meanings and motivations behind the songs on Time Out Of Mind. He’ll present thoughts on how ‘murder ballads’ might play a role in explaining the unified message on this album. In the talk you’re about to hear, Graley summarizes and gives examples of his analysis of the lyrics of Time Out Of Mind in relation to Murder Ballads. This is a recording of a talk he gave to our Premium Members a few months ago, and in the interest of time he narrowed his focus to share just a sliver of one of the book’s three theses. A video version of this episode is available to Premium Members at FreakMusic.Club. LINKS: Order The ... 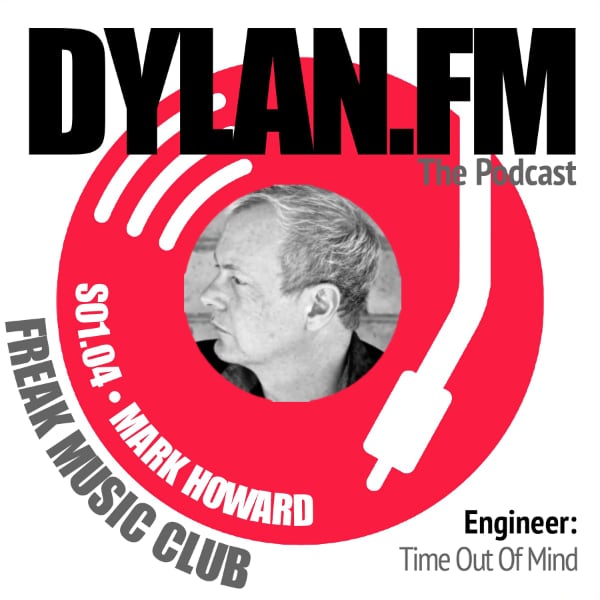 Mark Howard is an accomplished Engineer, Producer and Musician - who worked with Bob Dylan as the Engineer on two of his most loved albums: Oh Mercy and Time Out Of Mind. In this conversation Mark tells us about the everything from the very beginning when Dylan drove himself up to the Teatro Studio for a different project, to 3am phone calls when Mark encouraged Bob to come finish the songs they'd recorded and then put out Time Out Of Mind. In between we hear some great stories from inside the recording studio. A Premium Edition of this episode, about twice as long, is available to Premium Members at FreakMusic.Club. LINKS: Mark Howard's Book: Listen Up (Amazon) Mark's Photo Book: Recording Icons/Creative Spaces (Amazon) Mark Howard's Credits (Engineering, Production, Playing (AllMusic.com)   ... 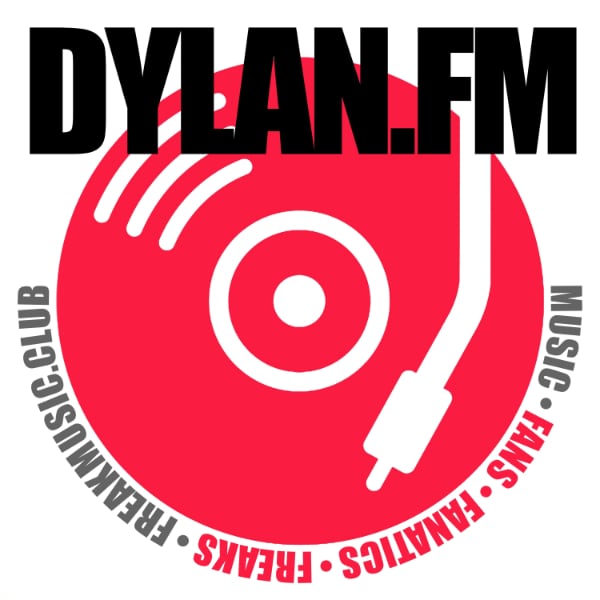 Time Out Of Mind followed 20 years in which Dylan was not always loved. In this episode we look at his career from 1977 through 1996 to understand where he was and to highlight how remarkable a comeback this album really was. We'll revisit the less successful years and see how his relationship with fans, the press, and the culture had changed, and how it was impacted by the release of Time Out Of Mind. We've lived for 25 years in which Dylan is universally revered - and the other period we hear about is the 60's and early 70's, when he was at the peak of his power and fame. This episode talks about the time between those two, when Dylan was out of favor, out of ideas, and low on energy. It was the land before TOOM. ... In this episode Howard Sounes shares the results of the extensive work he did writing the biography 'Down the Highway: The Life of Bob Dylan' which was recently updated for Dylan’s 80th. Howard tells us what he learned about the man, his life in the early 90's before Time Out Of Mind, and then the making of and release of the album. Howard is also author of Fab: An Intimate Life of Paul McCartney, Notes from the Velvet Underground: The Life of Lou Reed, Bukowski in Pictures and other books. LINKS: Down The Highway - The Life of Bob Dylan By Howard Sounes (Amazon) BBC Radio Special The Lonesome Death of Hattie Carroll By Howard Sounes ...